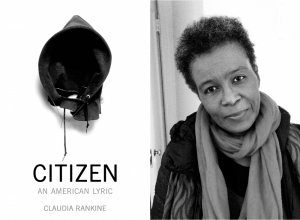 Poet Claudia Rankine penned an arresting, courageous body of work about racism with her book Citizen: An American Lyric (2013). I found Citizen to be one of the most important contemporary poetry collections I have read as it relates to the conversation women’s literature creates around addressing micro-aggression, marginalization, and racism in the United States in the 21st Century.

While the poetry of Rankine is not heavily scribed with coded symbolism and psychologically-associative imagery to insinuate her poem’s meanings, her prosaic, wise stanzas are free-flow narratives of varying sizes (minus line breaking, mostly) with a first-person/diary-entry voice and style. While I wasn’t always stunned by her poetic language or technical craft of line, I found the Citizen poems connected well as her first-person narratives built a case against racism. The poems hang together in a ‘lyrical’ way and have a building, operatic crescendo as the collection progressed. The disturbing subject matter; the narrative, documentation style; and the level-headed, analytical approach and tone is where I believe Rankine brings her strengths as a writer. She is a poet in keen observation mode. Her voice is authentic in its recounting of racist moments and the conflicts of questioning the status quo when the racism is insidious and obfuscated.

The disturbing subject matter; the narrative, documentation style; and the level-headed, analytical approach and tone is where I believe Rankine brings her strengths as a writer.

I was very interested to see Rankine presented her craft on racism in such a way that the poems were amassed as a type of proof or documentation for the reader. Rankine  left no stone unturned in the gathering of evidence and examples for her book’s statement on racism. She is meticulous in her analyses of texts and subtexts and she catalogues example after example of various literary and American media representations of racism. She begins Citizen methodically. She brings in written examples and random observations in poems that document the incessant, questionable comments and untoward behavior she encounters as a woman of color—catalogued by her from friends, subway trips, and even grocery store visits. Citizen is Rankine’s indisputable exhibition of how racism exists for her at a personal/micro level and also how intrinsic and inherent racism is throughout American communication mediums.

Moreover, as Rankine’s narrative gathers momentum, she builds larger exhibits of racism in her poems. She turns her gaze to reading sports news mediums that report on modern celebrity athlete and tennis champion, Serena Williams. Rankine includes examinations of numerous racist scenarios and textual readings of how Williams (and her sister, Venus) are mistreated by referees and opponents. She examines how the athletes are racially framed by the news and electronic media. She supplies texts from various written, audio and visual mediums that surround Williams’ sporting events and spectacles and the racism she highlights is glaring.

Rankine builds her American lyric to a final crescendo when she recounts and reads texts from the recent murders of African-American men and youth to include: Trayvon Martin, James Craig Anderson, Jena 6,  Mark Duggan, and more. Shot, lynched, and dragged by a truck are the myriad styles by which a few of these men of color were all murdered within the past decade. It is an appalling song she sings. By putting these accounts as further poems to her lyric, she dares America to deny this shameful behavior.

Rankine summates the book with a final, haunting call out on racism by writing ‘Scripts for Situations.’ She combines photos and commentary fragments in a cacophony of quotes between white athletes, black athletes, sportscasters, Shakespeare, black historians,  poets and thinkers. Rankine builds an ultimate cry for help as she calls upon all of these figures of power and wisdom to hear her address an ailment that is so violently out of control in our country.

Rankine builds an ultimate cry for help as she calls upon all of these figures of power and wisdom to hear her address an ailment that is so violently out of control in our country.

Included with all the poems in Citizen are Rankine’s presentations of photographs, news program footage, television scripts, sports scorekeeping calls, quotes, sound bite analyses, lip readings, paintings, sculpture, and old documents. She presents such a vast collection of ‘evidence’ that the story she tells gathers speed with list energy and illustrations of racism by example after example of account. To that point, Citizen is a beautiful collaboration of both the written and visual arts. The images Rankine offered add a rich visual appeal with deeper meanings and layering to the complicated narrative she built. In hand, the book is an objet d’art with a thick, slick, and lush hand-feel full of the high art images she chose to include. I found the whole collection to be provocative, highly-designed and heartbreaking as Claudia Rankine endeavored to highlight her unique American perspective on racism.

Error: Twitter did not respond. Please wait a few minutes and refresh this page.